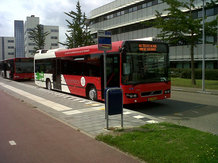 The first ever public-service field trials of a 12-meter electric bus charged wirelessly by induction are currently underway in s’Hertogenbosch (Den Bosch) in the Netherlands. Green power makes the electric bus, a converted Volvo diesel bus, completely climate-neutral. In addition to overnight plug-in charging, opportunity charging will allow the electric bus to run reliably for 18 hours, covering some 288 kilometers a day, without the need to stop for prolonged periods. Opportunity charging means that the electric bus invisibly receives a top-up charge by a 120 kW wireless inductive charging system within the space of a few minutes while at a bus stop.

Inductive Power Transfer – or IPT® – is an energy transfer system for electric vehicles that works by magnetic resonance coupling. The system consists of a primary coil in the road, which is connected to the power grid, and a pickup coil fitted beneath the vehicle. The key features of the system are its convenience and safety: the bus driver can monitor the charging process on a monitor in the vehicle cockpit. Tripping hazards and electrical accidents are ruled out from the start, as are vandalism and metal theft. Economic benefits are above all the higher availability of the vehicles and the possibility of using smaller and therefore less expensive batteries.

The trial has come at just the right time, as stricter emissions standards are due to come into effect in the EU in 2014. Commercial vehicles such as buses will then be required to cut their nitrogen oxide emissions by 80 percent and their particulate emissions by 67 percent, relative to the current Euro V standard. Demand for climate-neutral vehicles for local public transport has already risen sharply. Electric vehicles are particularly attractive, as they generate just a fraction of the energy costs of diesel buses. In combination with the right charging technology, their total cost of ownership will be lower in the medium term, in spite of currently higher purchase costs. Depending on the size of the fleet and the number of charging points, the purchase of a bus that uses inductive charging can pay for itself within as little as three or four years. In Milton Keynes in the UK, eight electric buses will go into regular service in summer 2013 with the clear target not only to prove ecologic but also economic advantages of electric buses with wireless inductive charging.