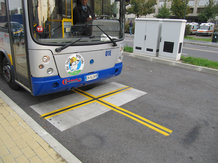 For urban local public transport in particular, the electric bus is the mode of transport of the future. With respect to the total cost of operation over its entire service life, it is far more economical to run than CNG-powered buses, hybrids or purely diesel-engined buses. The electric drivetrain is a compelling solution first and foremost due to its excellent energy balance: a recent comparison from the USA has revealed that the electric buses selected consume about $9,000 worth of energy in a year, whereas a comparable diesel bus burns fuel worth some $50,000. The acquisition costs of an electric bus, which are still higher at present, pay off by the fourth year of operation at the latest. In China this insight is no longer being called into question, but instead is being put into practice on a large scale – for example in rapidly growing cities such as Shenzhen.

To boost the profitability of a bus fleet, however, it is not just a matter of the drivetrain: you also need the right charging technology. Due to regular interim charging, fleet operators can buy cheaper buses with smaller batteries in which the cell chemistry is kept healthy by more-frequent, but shorter charging cycles, meaning that the cells have a longer service life[1]. With the operational concept termed opportunistic charging, much less weight needs to be carried around and no special journeys to battery exchange stations are needed. This has a positive effect on the overall cost and on system efficiency. And that’s without even factoring in the tax benefits, or the fact that there are no emissions levies to pay and that the maintenance costs are lower.

Conductix-Wampfler has been demonstrating for many years how well inductive charging of batteries can work in the context of local public transport: there are about 30 electric buses in Genoa and Turin that have been using the company’s IPT® technology since 2002. Ten years on, the Italian public transport companies AMT and GTT deem the application of this technology under everyday conditions to have been a success. The buses in Turin reliably travel 200 kilometres a day without needing to stop anywhere for a prolonged period or having to return to the depot for charging.

However, the bus routes with the IPT® charging systems haven’t only proven themselves from the economical point of view, but also because they are so quiet and produce zero emissions. As the chargers can be integrated invisibly, they neither compromise the cityscape nor detract from the tourist attractions. There’s nothing for people to get hurt by tripping over, and there are no secondary costs due to vandalism or rodent damage.

The idea is as simple as it is clever: Inductive Power Transfer – or IPT® – is an energy transfer system for electric vehicles that works by magnetic resonance coupling. The system consists of two main components: a primary coil, which is connected to the electricity grid via an infeed converter, and a pickup coil integrated in the floor of the bus. This technology permits an efficient, automatic, contactless transfer of energy.

IPT® is convinced that short but regular charging is the way to go. The battery is fully charged overnight and then topped up as necessary and as possible over the course of the day at suitably equipped stops, generally by about 10–15%, depending on how long it stays at the stops.

The topping-up of the batteries, e.g. at terminals, railways stations or hubs, ensures that the buses have sufficient range, so that the energy they need to store can be kept to a minimum. This allows the capacity of the batteries to be reduced by as much as 75%, assuming a vehicle without IPT® Charge is even able to carry enough energy storage to complete a whole day’s operations. This greatly reduces the purchase price and weight of the vehicles and does not impinge on the size of the passenger compartment.

The number of charging stations is individually adjusted to suit the size and the operating situation of the bus fleet: the more buses there are in a fleet and the more charging stations there are, the more flexible the system and the shorter the charging cycles can be. The acquisition and operating costs are spread over several buses. The buses can be charged with 60 kW or 120 kW at bus stops or at route termini while passengers embark and disembark. While charging, the current collectors on the bus take up a position about 40 mm from the charging coil in the ground, facilitating an extremely efficient energy transfer: 95% of the energy taken from the electricity grid is stored in the battery during normal operation. This makes the IPT® technology, in a direct comparison, virtually as efficient as charging via a charging cable with very good battery chargers available today, and in many cases superior to low-priced plug-in battery chargers.

While the electric bus is automatically recharged inductively during short stops at bus stops, the driver can keep an eye on the charging process from his seat via a conveniently positioned monitor in the vehicle cockpit. In fact, Conductix-Wampfler has now launched the second generation of its charging technology on the market: the system is even easier to integrate in existing systems. Its enhanced diagnostic functions and improved network connectivity mean greater operational transparency for the user.

Not only does this do away with the need for handling heavy charger cables, but also the danger of electrical accidents in rain, snow or hail. As a negative example in this respect, just take the operating instructions that one renowned manufacturer supplies with electric vehicles in the USA: they warn explicitly against touching the plug with wet hands or standing in a puddle or in snow while charging. As the bus driver doesn’t need to leave the bus for recharging or never comes into any kind of contact with the charging accessories, there is no need for service staff with electrical engineering training. The stray magnetic fields remain restricted to the immediate vicinity of the coil.

Other pilot and test projects have been or will be equipped according to the same technological and operating approach as that used in Turin, Genoa and industrial projects in local public transport scenarios in Japan, Lucerne (Switzerland), Lörrach (Germany), Rotorua (New Zealand), Utrecht (Holland) as well as Los Angeles and Chattanooga (USA).

There are currently no real alternatives to the electric drivetrain in city buses. It’s only a matter of time before we are hit by the next acute oil price rises, to which the price of natural gas is tied. The zero-emission buses are also highly recommended in the light of international legislation, too: in California it is already mandatory for 15% of all urban transportation to be zero-emission, and there are also restrictions on diesel in a number of megacities in Asia already. Based on the assumption that the price of the vehicles and batteries will continue to fall, the TCO models will come out in favour of electric buses with opportunistic charging much sooner than one might expect. And once the increasing emissions offset costs of diesel and hybrid buses are included in the equation, the result of any comparison will be very conclusive.