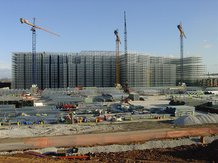 In the last few years, the Wampfler Group has implemented solutions in energy supply and data transmission all over the world. This includes several showpiece projects known beyond their frontiers. Thus the solutions from Wampfler Business Unit Cranes & Heavy Machinery are mainly used for heavy cranes. For example, Wampfler has festoon systems for several container and stacker cranes of the Pasir Panjang Terminal from PSA in Singapore. Also the Eurogate crane systems, the Burchardkai container terminal in Hamburg, Germany, and a port in Georgia in the US were equipped with Wampfler’s technology. For a grab crane used to load ore for Thyssen-Krupp-Stahl AG in Duisburg, Germany, Wampfler developed a moveable energy supply, which has to withstand severe stress regarding weight and environmental conditions.

If lighter goods or passengers have to be transported, the Wampfler Business Unit Transport & Automation solutions are what is needed. In Montreal, Canada, for example: Wampfler provided the energy supply system for the inclined elevator in the futuristic Olympia Park Tower, one of Montreal’s landmarks. Further south in the US, in the “The Entertainment Capital of the World,” Las Vegas, Nevada, there is a shuttle connecting the luxury hotels Mandalay Bay, Luxor and Excalibur using Wampfler’s energy supply system. In the UK, Wampfler’s energy supply system for the “Millennium Wheel” Ferris wheel in London supplies energy to the wheel, the cabins and the wheel hub.
In 2004 at Zürich airport in Switzerland, Wampfler implemented a complete energy supply concept and the assembly logistics for a subterranean rail system. A total of 12 kilometers of conductor rails were delivered and assembled. Currently, Wampfler is equipping conductor rail systems for Stöcklin Logistik AG in the high-bay warehouse of the Irish beverage bottle manufacturer Quinn Glass in Ince at Liverpool, UK. That warehouse is the largest of its kind in Europe to date.
Wampfler technology is used not only internationally but also in the firm’s birthplace of Germany. In the “Tabaluga & Lili” musical theater in Oberhausen, Germany, which is considered a jewel, Wampfler provided both the stage-lighting system and moveable stage spring cable reels, thus making a perfect production of the popular children’s musical possible. In Lörrach, Germany, the first inductively charged electric bus in Germany was started in July 2005. The energy supply system for the small bus is based on the Inductive Power Transfer System (IPT®) developed by the Wampfler Group. The same environmentally friendly energy supply system is also used in busses in Turin, Italy; Genoa, Italy; and Lucerne, Switzerland.

The Wampfler Business Unit Handling Systems makes their expertise available to various customers, in particular those from the automotive industry. Wampfler implemented the energy supply system for the final assembly line to manufacture the Smart car in France; Wampfler also implemented the energy supply for MAN in Munich, for VW in Saxony, Germany as well as a battery charging system in the final testing area for BMW in South Africa.